A Vindication of Tlön: Photography & the Fantastic

A Vindication of Tlön: Photograp... 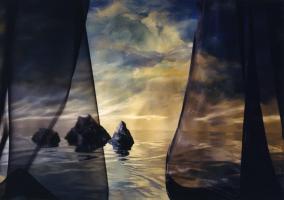 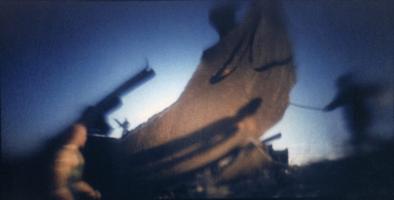 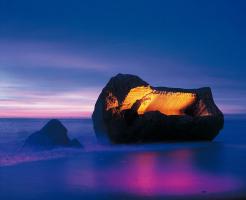 One of the schools of philosophy on Tlön claims that the history of the universe – and in it, our lives and every faintest detail of our lives – is the handwriting of a subordinate god trying to communicate with a demon. Another, that the universe might be compared to those cryptograms in which not all the symbols count, and only what happens every three hundred nights is actually real.
Jorge Luis Borges, Tlön, Uqbar, Orbis Tertius

Chi vuol veder il Mondo Nuovo? - Who wants to see the new world? - was the cry of the itinerant Savoyard showmen who tramped across 18th-century Europe with mysterious wooden boxes strapped to their backs. Set up in villages squares, markets and fairs, these intriguing objects became peepshows, entertainments available to any curious passer-by in exchange for a small payment. The precursors of photography, cinema and television, peepshows consisted essentially of backlit views of exotic and imaginary scenes painted upon glass or translucent paper, observed through one or more small openings in the side of the box. Unlike the camera obscura with which they are sometimes confused, peepshows were not limited to reflecting reality, but were capable of depicting entirely fantastic worlds.

A hankering for the fantastic, for a “mondo nuovo”, seems to be an inextricable part of human nature, rooted in our instinctive dissatisfaction with everyday reality. The fantastic has been economically defined as “the deliberate violation of consensus reality”, and for the critic Simon Watney, fantastic art constitutes “an imaginative criticism of reality”. This chaffing at the limitations of reality is evident in almost every field of intellectual or artistic endeavour, including of course photography, which has all too frequently been considered little more than a method of reproducing reality as faithfully as possible.

Jorge Luis Borges’s short story Tlön, Uqbar, Orbis Tertius is the inspiration for this year’s international group exhibition. A Vindication of Tlön is both a tribute to Borges and an exploration of the fantastic in photography, one for which work has been sought or commissioned, not in the form of illustrations to Borges’ story, but in emulation of the project it describes; just as the authors of the first Encyclopaedia of Tlön, that “secret society of astronomers, biologists, engineers, metaphysicians, poets, chemists...” strove to create the world of Tlön in words, photographers were invited to create images which might reflect such a world.

Alongside A Vindication of Tlön are a number of solo exhibitions which further elaborate and illustrate aspects of the fantastic in photography, all consisting of either newly commissioned or very recent work. The range of strategies and approaches demonstrated are as varied as the work, ranging from staged photography and digital manipulation to straightforward, unmanipulated representations of the ‘real world’ which are, nevertheless, as strange as anything emerging from the wilder shores of Tlön or Uqbar.
John Stathatos