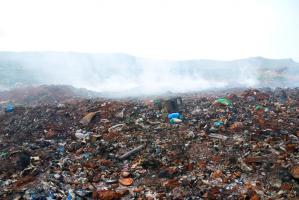 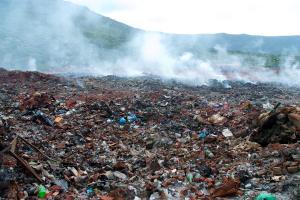 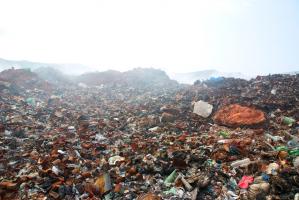 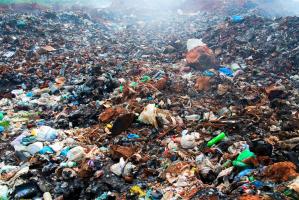 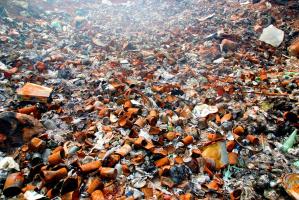 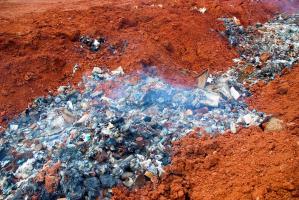 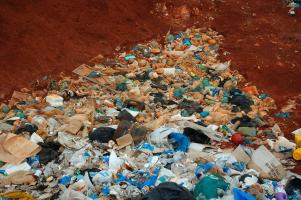 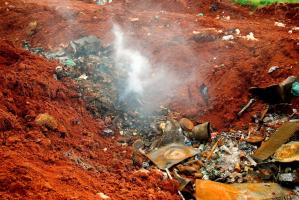 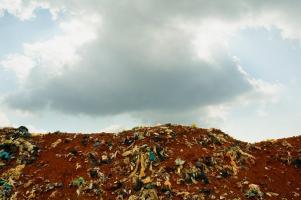 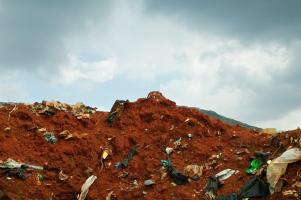 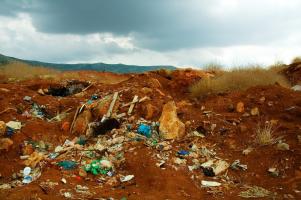 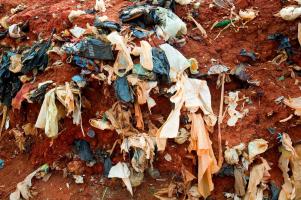 Alexandra Moschovi
ELEGIES OF THE IMMANENT

An ocean of rusting tin cans of every size and variety surges beyond the image frame. The scattered remains of multicoloured plastic bags and smashed bottles punctuate an otherwise uniformly monochrome landscape. The carcass of an old electric cooker stands like a monument among the calcinated debris of various long-since decayed objects, while behind the pall of smoke blanketing the scene emerges the outline of a hill, sole token of a natural environment. What is it that John Stathatos asks us to read in these highly detailed photographic tableaux of refuse heaps?

Sharing the fundamental concerns of his earlier sequences Three Heraclitean Elements (1991), The Gardens of the Hesperides (1993), akea (1996), The Book of Lost Cities (1998) and Stones (2006), Airs, Waters, Places further develops the artist’s long-standing meditation on what he has termed the “invention” of landscape.1 Enlarging upon Lucius Burckhardt’s aphorism to the effect that landscape is an ideological construct, the invariable product of a specific culture and period, Stathatos often turns to ancient Greek notions of nature and natural beauty in order to illuminate contemporary beliefs about nature and the landscape. akea, for instance, derives its enigmatic title from Heraclitus’ On Nature, playing on the counterpoint between the stark remnants of a brush fire and the Greek word’s double meaning of ‘healing’ and ‘sacrifice’.

Stathatos’ usual practice combines elements of the ontological issues of photography, literature and conceptual art. His juxtaposition of different representational systems is not simply designed to answer the question “what is that which is being represented?” or check the polysemy of the photographic image in order to make it more accessible; on the contrary, such a synthesis provides an additional frame of reference, encouraging the viewer to consider the various traditions, cultural paradigms, philosophical axioms, religious beliefs, memories and the collective imaginary which delineate our perception of place and which are not necessarily discernable in the ostensible surface message of the photograph. At the same time, it raises questions about the act of photography itself, about the indexical function of the medium, its representational and narrative aspects.

The title of this new work, Airs, Waters, Places, refers to the eponymous Hippocratic treatise, now recognised as the philosophical foundation of contemporary biomedical and bioclimatic science inasmuch as it considers the natural environment of human habitation (the prevailing winds, the orientation of cities, the effects of solar radiation and the quality of water) a decisive factor in the physical and mental wellbeing of its inhabitants. And yet these images appear to illustrate the polar opposite of the title’s promise. Stathatos presents us with the dystopic consequences of contemporary consumer society. Hundreds of plastic carrier bags, worn tyres, rubble, broken toys and food remnants, rotting vegetables and decaying decorative plants, removed from their normal context and scale, compose a real and metaphorical nature morte.

Photographed by early morning light or in the warm tones of late afternoon, at distances varying from proximate to panoramic, the mountains of refuse seem a mockery both of aestheticism and of the Romantic vision of an idealised landscape cleansed of human intervention.  The atmospheric skies, a nod to Turner’s late obsession with natural phenomena as well as an ironic comment on the stereotypes of picturesque photography, come as a complete contrast to the ‘dirty’ realism, the gaudy colours and inchoate nature of the principal subject.

The clarity of the photographic image and its raw immediacy on the one hand, and a viewing angle and degree of enlargement which render the scale of objects ambiguous on the other, result in a singular kind of realism which oscillates deliberately between the real and the iconic, the familiar and the uncanny. From a distance, the mounds look like other-worldly planetary landscapes from the distant future, artificial jungles dotted with the remains of extinct animals. They return an inverted echo of that romantic landscape tradition which populated a view with ruins and monuments of the past – a tradition which Stathatos has already addressed, both formally and conceptually, in The Book of Lost Cities. However, as we come closer, the landscape resolves into its several parts: its true components, some clearly recognisable and others mere unidentifiable fragments, are revealed behind the hills and valleys, the deserts and chasms.

Unlike others of his contemporaries, Stathatos does not attempt to aestheticise bleakness, nor does he transform trivial subject matter into exquisite imagery through the use of painterly iconographic allusions. Though they deliberately undermine the lyricism and aesthetic conventions of the sublime in classical landscape art, the images of Airs, Waters, Places are not exhausted by this; their concern is more profoundly political, addressing as they do the enterprise of late capitalism and the consequences of consumerism upon the environment.

This eschatological practice undoubtedly reflects the general ambivalence characteristic of contemporary approaches to landscape, from the documentation of urbanisation in Lewis Baltz’s trilogy, Peter Goin’s nuclear landscapes, Richard Misrach’s Desert Cantos, Tim Head’s nightmarish micro-landscapes and Keith Arnatt’s still-lives of rubbish, to the sweep of Edward Burtynsky’s epic views of quarries, tyre cemeteries and third-world ship-breaking yards. Stathatos does not subscribe to an aesthetics of the abject as propounded by Kristeva,2 nor does he attempt to exploit the phobic effect of Hal Foster’s “traumatic realism”.3 The thematic transition from the pseudo-idyllic landscapes of his earlier work to the refuse of civilisation is equally a metaphor for the decay and disintegration of contemporary society, the fragmentation of human relations and the alienation of everyday life, as indeed is implied by the title of the sequence.

And if according to Kristeva the abject is a necessary and capable corollary of representation, for Stathatos, a consideration of what could be regarded as abject and base also represents a reappraisal of the representational aspects of the medium itself. As he has himself characteristically written, at a time when grand narratives and the utopian ideals of modernism have lost their authority, it may perhaps be time for art, and specifically photography, to find “a kind of consolation” in a material world no longer considered corrupt when “such transcendence emanating from the simplest of objects might represent a new and optimistic interpretation of what Gnostics called the Parousia, the presence of the immanent”.4 Stathatos sees photography as the threshold between what can be seen and that which evades our vision, as well as an art by definition elegiac, the tool whereby the immanent is transformed into a memory and a history located in the dimension of time. Correspondingly, the images of this sequence assemble the past, present and future of “that which was”, both visible and invisible, into the elegy of an inauspicious future.

(1)  John Stathatos, The Invention of Landscape (Thessaloniki: Camera Obscura, 1996)
(2)  Julia Kristeva, Powers of Horror: An Essay on Abjection (New York: Columbia University Press, 1982)
(3)  Hal Foster, “Traumatic Realism” in The Return of the Real: The Avant-Garde at the End of the Century (Cambridge/Massachusetts/London: The MIT Press, 1996), p. 130-6
(4) John Stathatos, “Images for the End of Time”, Tate: The Art Magazine, London, Winter 1999