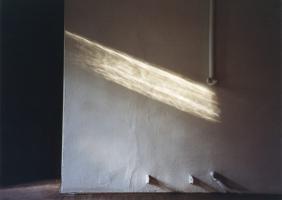 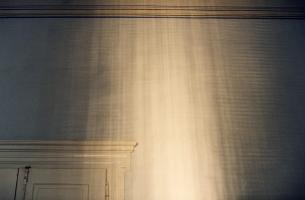 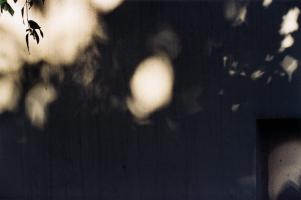 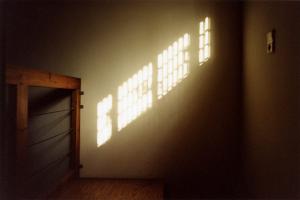 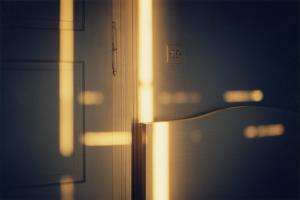 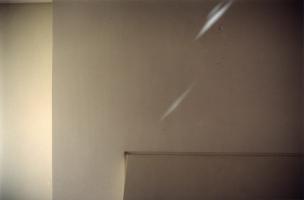 that which falls between light and shadow
(Pliny the Elder, On Nature, Book 35)

Lumen was inspired by a quotation from the 35th Book of Pliny the Elder’s On Nature, which deals with the art of ancient Greek painting. The images depict the traces made by natural daylight falling into darkened interiors. Sometimes waterfalls of gold, at others evanescent, disembodied signs, these distinct and self-contained traces seem to represent a distillation of light in its most rarefied state. According to Aristotle, the Pythagoreans believed that the particles caught in this light represented the soul: “for some of them declare that the motes in the air are the soul, whilst others claim that it is what moves the motes; for they seem to be in perpetual movement, even in a dead calm” (On the Soul).
J.S.

Glory be to the wooden table
to the bright wine stained by the sun,
the playful glimmer of water on the ceiling…

Lumen leads us to think about light. In physics, light is nothing but an electromagnetic wave travelling through vacuum which becomes visible in contact with matter. By nature, light endows the world with presence, namely volume, texture and colour. In its absence, the world seems to vanish from sight. As a physical entity, we take light for granted, and have unshakeable faith that the sun will keep shining forever.

Light appeals in many ways; it illuminates, it emits warmth, and is also an emblem of knowledge. In many cultures, light has been regarded as a source of revelatory inspiration. Actually or metaphorically, the sun has been variously celebrated by the cult of Aten in Egypt, the worship of Apollo, the Louis XIV’s personification of Apollo as the Roi Soleil, the painted interiors of Jan Vermeer, Odysseus Elytis’ poem "The Sovereign Sun" and Olafur Eliasson’s installation the "Weather Project" (2003). With Lumen, John Stathatos pays his own poetic homage to the sun.

The pervasive theme of Lumen is one of dark interiors irradiated by the sun. In his meditation upon light, John Stathatos chances upon darkened rooms as natural light illuminates them, keeping a visual record of heightened moments as if for a diary he wishes to share with us. The procedure is utterly direct and straightforward; the scenes are approached with devout respect for the manifestation of things, with no attempt at staging or narrative. Things are shown in their state of existence with simplicity, tranquillity, and inner calm.

Rather than presenting illuminated space as it is, the artist suggests space as it feels. The pictures seem to be more than merely a visual record of interiors. Lumen is about an ongoing relationship between light and dark. The effect is an ever-fugitive atmospheric chiaroscuro.  At every turn, it is as if lumen and umbra, light and shadow, meet in an inseparable composition of balance and harmony.

The strength of Lumen resides in the fact that these photographs are for once free of stillness, as though projected from an endless reel of film upon the same plane. In a way, they could be an example of chronophotography, capturing the orbit of the sun over a self-contained cosmos. The sensation is mystical, as if the room were an unworldly womb, peopled by ghosts and pregnant with their whispers. Lumen is reminiscent of script across a tabula rasa; like the process of photography, it is literally the writing of light. Each image feels like a missing page from our own autobiography. Through our eyes, John Stathatos seems to suggest the transience of our thoughts, feelings, and emotions about a utopia we have always longed for.

Looking at the images which constitute Lumen provokes a sensation of déjà-vu. Surely we have all passed through spaces barely touched by light, and hurried away thinking to ourselves that the space could do with more light. But did we pause for a while to marvel at the beauty of these ambiguously lit interiors? That is what catches our attention; ambiguity. The atmospheric chiaroscuro of Lumen is all about ambiguous moods. The time of day feels like dusk or dawn, the source of light may be direct or reflected, the scene is at the same time intense and calm, the picture seems to be either a negative or positive image of reality, and colour can be perceived as black & white. This ambiguity must be solved – if at all – by the beholder, and every time the solution is different.

The light that John Stathatos captures is not just physical, but metaphysical, with a life of its own. As such, it is reminiscent of an artistic convention peculiar to Akhenaten's time by which the edges of the sun’s rays were personified as hands. The light does not just fall on materials, it rather touches their surface with a heightened feeling. Where it is cast, the light creates an aura of luminous radiation. In effect, the light-switch is hallowed, the moulding caressed and the wall shattered. With Lumen John Stathatos makes portraits of pure interiors whose dimensions lie beyond space and time. These portraits belong to the realm of the psyche, the spirit and the soul. Every photograph of Lumen is yet another enigma perhaps too familiar to resolve.