The Industrial Photography of Dimitris Charisiadis 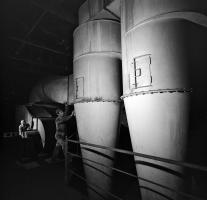 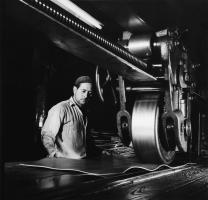 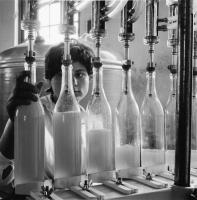 The term ‘industrial photography’ covers a wide spectrum of largely functional photographic practices, from the meticulous record of manufacturing processes to the depiction of factories and manufactured products for the purposes of advertising or propaganda. In Greece, industrial photography developed late, as indeed did industry itself. In effect, it first appears on the scene at the end of the civil war in 1947, arriving as it were on the coat-tails of the country’s postwar reformation.

When, around 1952-53, Dimitris Harissiadis founded his agency, his manifest professionalism led to collaboration with the many new private and state-owned industries then starting up. Over the next three decades, he was to be employed or commissioned by virtually all the major representatives of the Greek economy, including the National Bank for Industrial Development (ETBA), the National Power Enterprise (DEI), Hellenic Shipyards, Aluminium of Greece, Viochalko, Hellenic Refineries, Piraiki-Patraiki mills and many others.

It is worth emphasising that Dimitri Harissiadis’ industrial photography is exclusively the outcome of specific commissions: these images cannot be regarded as either investigative or socially concerned photography. In this case, Walter Benjamin’s well-known comment about photography’s absolute lack of transparency is peculiarly apt. While this does not imply that Harissiadis’ work lacks any value as testimony, one should keep in mind the circumstances under which it was produced.

In the final analysis, as is the case with every body of photographic work produced over a long period of time, Harissiadis’ industrial images can be approached in different ways and from different directions. First of all aesthetically, as an often impressive example of photographic modernism. Next, as documentation of a chapter of Greek economic history now lying firmly in the past. Finally, they can also be read as the reflection of a particular political and economic historical conjunction.

"The Industrial Photography of Dimitris Charisiadis" was only one section of the large retrospective exhibition Φωτογραφικόν Πρακτορείον «Δ.Α. Χαρισιάδης» (The "D.A. Charisiadis" Photo Agency) at the Benaki Museum, Athens in 2009. It was accompanied by a substantial monographic catalogue with contributions by all the section curators.